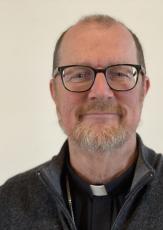 Olof Palm is 63 years old and is married to Annica. They have five adult children and, in the last couple of years, they have also been blessed with grandchildren. Olof has been a priest since 1985 and, in addition, has always had a civilian job running alongside. For the last 13 years he has been working as a gardener and as a garden teacher. Olof believes God has shown himself to us in Jesus Christ. He is a firm believer in the good of creation, both the spiritual and the physical one. He also believes that God intended us to use and enjoy our bodies because we are created in His image.

Olof Palm is a priest at St Petrus Evangelical Orthodox Church in Halmstad. He has been connected with ICDF Scandinavia since its formative days as CDF Sweden and, in the early years, was one of their theological advisors.

Connecting our faith and calling in movement